embARC graduation and show at Blake

Students from the embARC summer program, a program for high school students who are interested in college for architecture, landscape architecture and urban planning were here last week with their families for graduation and  an exhibition of bird nest boxes they have designed and built on campus during the program.  Some will be installed at Blake to support our birdlife.

We have been collecting rainwater from the roof into a small cistern. After 1/3 of an inch of rain, the water over flows down a bamboo aquaduct into the greenhouse to water the few remaining plants. Not watering tropical plants in the green house has been one of the strategies for saving water during the drought. The water collected is also used in the nursery out behind the greenhouse. We have done many things to conserve water: installing low flow toilets and metered faucets in our bathrooms; capturing grey water from the kitchen sink and using it to water beds in front of the greenhouse; installing new low flow irrigation systems through out the garden; building the soil and its water holding capicity by mulching and composting most garden beds; reducing the size of our large event lawn; capturing water flowing from a underground spring and using it in areas where we have no irrigation; reducing overgrowth and weeding out the undergrowth; and replacing thirsty plants with drought tolerant plants and native California plants. Many of our pools are low and grassy areas are brown as we wait for fall rain. According to East Bay Municipal Utlities District current report we are now using 45% of the water allocated to us.

Many thanks to local photographer Geoffrey Agrons who visited the garden recently and photographed the aqueduct in action. Three of these photographs or "melancholigraphs" from his "California Drought Series" are featured in this post. Over the years Geoffery has also photographed the LEAP student's intervention projects at Blake. You can enjoy the photographs here.

Recently  we have been pruning trees and taking down the dead trees. A leaning Black acacia was taken down near the creek. We are processing the downed log  to make lumber for tables and will be giving some to local artisans to make bowls. A volunteer and a workstudy student decided to try using an old method, and used a bucksaw to cut the log in half.

Kids For The Bay at Blake Garden

Kids for the Bay, a summer camp for area kids came to the garden for a tour and then worked in the Create with Nature Zone  with artist Zach Pine. Later a  San Rafael wildlife group came and gave a talk and demonstration with live birds & snakes and along with other educational materials.

Each summer the [In]land summer program from U.C. Berkeley's College of Environmental Design comes to the garden for their first assignement entitled "Revealing the Landscape". Students tour the garden looking for a site that impresses them in some way and respond with a temporary installation/intervention. These are the entries for this year.

The next part of the project will involve installing a pool at the top of the catchment area to slow incoming water and direct it south along the swale  along the road and west downhill into the flower bed. Both areas are lined with drainrock and then larger tumbled round rock will be laid in on top. For the catchment pool we had to pull out one of the cotoneaster shrubs, remove the stump and then back fill with soil and drainrock.

As we were working on the rain garden/french drain project we got more material donated to us from a project at the College of Environmental Design project: Trex, a recycled plastic edging board and some drainage rock to replace the rotted existing edging. As we took the opportunity to reuse the recycled materials, we made the swale wider and deeper to hold more runoff rainwater and we are also regrading the road with the road base cut from the edge of the road.

Structures that were built out of donated timber bamboo from the garden and recycled fabric hold Coast live oak trees that will be planted by College of Environmental Design students taught by Professors Walter Hood and Ron Rael in locations around Oakland. 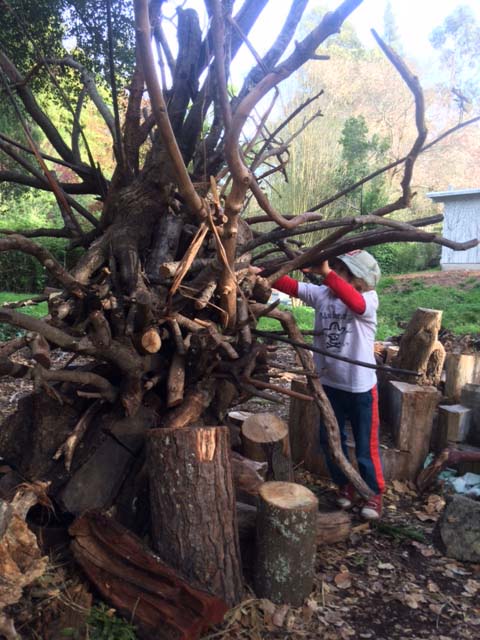